Studying abroad can give students unforgettable, real-world experiences related to their studies. Gaining a global outlook in their field can also help graduates stand out from their peers in the job market. 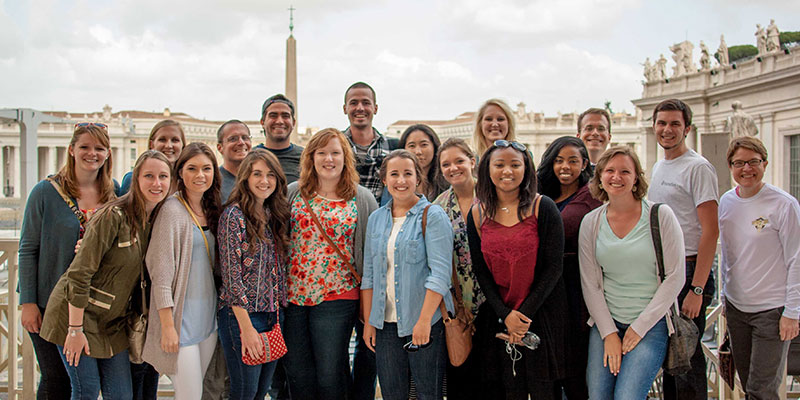 ALEC faculty member, Dr. David Rosch also leads a biannual leadership study abroad opportunity to Italy. The two-week immersive trip emphasizes "Leaders in Roman History," and focuses on how leadership decisions influence society and vice versa. This immersion trip focuses particularly on the Roman Empire, the Holy Roman Church, the times of Machiavelli in Florence, the times of Marco Polo in Venice, and the modern Euro state. The overall goal is to compare and contrast the curriculum in leadership coursework at Illinois with the significant leadership history that exists in central Italy.

This study abroad opportunity includes enrolling in a three credit second-8-week course during the Spring semester. The trip to Italy occurs in the two weeks immediately following May graduation weekend at the University of Illinois. This opportunity is open to any student (even graduating seniors), with preference given to students in ALEC or enrolled in the Minor in Leadership Studies. Applications are open during the Fall semester prior to the trip occurring, and are due December 1 of that semester, with accepted students notified prior to Winter Break.

Gary Ochs leads a trip to Panama during Winter Break for College of ACES freshman. The course is ACES 298 – Discovering Agricultural & Environmental Systems in Panama. During the second-8-week course leading up to leaving for Panama, students learn about the culture and history, government, and agricultural systems in Panama and the surrounding Carribean countries. This program partners with Explorations by Thor.

Students will experience large and small scale agriculture through tours of farms, such as goat/sheep, sugarcane, coffee, citrus, and rice, as well as being exposed to environmental and economic concerns. Through these tours of farms and Panama City, students will learn about the agrarian practices, customs, cultures, and history of Panama, and see why Panama is such an important piece of American agriculture. Panama is a country in Central America with a population of roughly 4 million people. It is bordered by Costa Rica to the west, Colombia to the southeast, the Caribbean Sea to the north, and the Pacific Ocean to the south. Panama City is the capital and home to the Panama Canal, which is considered one of the 7 Wonders of the Modern World.

With over 400 study abroad opportunities available to students at the University of Illinois, picking the right one can be a bit of a challenge. The ACES Study Abroad office offers program listings tailored to each major in the College of ACES and has identified several opportunities that could be a perfect fit for students majoring in Agricultural Leadership, Education, and Communications.

More information on study abroad opportunities can be found on the College of ACES and University of Illinois study abroad websites.